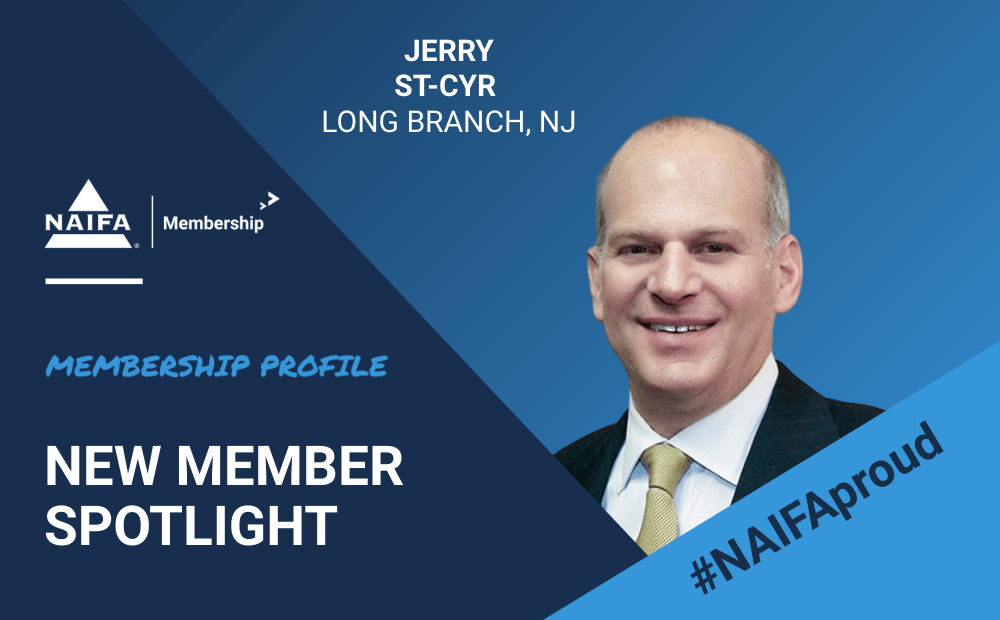 New NAIFA member Gerard “Jerry” St-Cyr resides in Long Branch, N.J., and is with Eagle Securities, a subsidiary of New York Life. Jerry is not only new to the association, but he is also relatively new to the industry. Before his career in financial services, he built an impressive resume featuring leadership roles in a collection of successful businesses and philanthropic endeavors and organizations. Previously, Jerry was the CEO of a dental startup company, as well as the Director of Sales and sommelier for a wine import company, Select Fine Wines. He is also the author of Womanity and My Wine Guide. He is the founder of the non-profit organization benefiting at-risk women, WOMANITY4WISE.

Jerry’s transition from his former roles to financial professional came when he was approached by a manager from Morgan Stanley at his tennis club. His friend explained that he heard Jerry was great with both math and people, skills he knew would lead to a successful career in financial services. Jerry notes that after careful consideration and multiple conversations with his friend, he accepted the offer and joined Morgan Stanley.  Jerry’s decision arose from his desire to accomplish new tasks and help others. He states, “I liked the idea of a completely new challenge. I like finance and have been investing in the stock markets since 1994. I also like to help people.”

Jerry soon realized that helping those around him was paramount among his professional goals. He states, “My goal is simple: To help as many people as possible retire in comfort and with dignity.” Like many other professionals in the industry, Jerry offers life insurance, long-term care Insurance, financial planning, retirement planning, legacy planning, and customized tax-deferred defined benefit plans  (his specialty). He believes that through these services he “is able to help as many people as possible with their financial and retirement planning.”

When it came to selecting his professional association, Jerry turned to his managers for advice, who “without hesitation told [Jerry] to join NAIFA.” Jerry has already realized the importance of supporting NAIFA’s advocacy efforts, although he admits he has a lot to learn he is eager to get involved. Jerry notes, “I am learning about [NAIFA’s advocacy] and from what I have read to date it is very interesting. I would like to get more involved in NAIFA's political advocacy in the future.”

Jerry has developed a particular interest in the PRO Act and, since joining into the association in February, has become a member of the Diversity, Equality, and Inclusion (DEI) Council. It is a natural fit, he says, due to his “fervent proponent of equality regarding both race and gender.” In fact, for his new book WOMANITY! A Tribute to Women, Jerry collaborated with a local congresswoman and an attorney  to explore the Equal Rights Amendment, an experience he describes as “enriching.”

Jerry encourages others within the industry to join NAIFA not just for its networking opportunities and advocacy but for the educational resources. He explains, “NAIFA has so much to offer, including [professional development]. I recently [participated in a webinar]and found it very helpful.” He also states how the comradery is something that he admires. He noted “how nice and helpful everyone is, the members are good citizens.”

Thank you so much for your hard work and dedication in such a short period of time, Jerry. We are #NAIFAproud to call you a member of our association and know your future with NAIFA is bright.