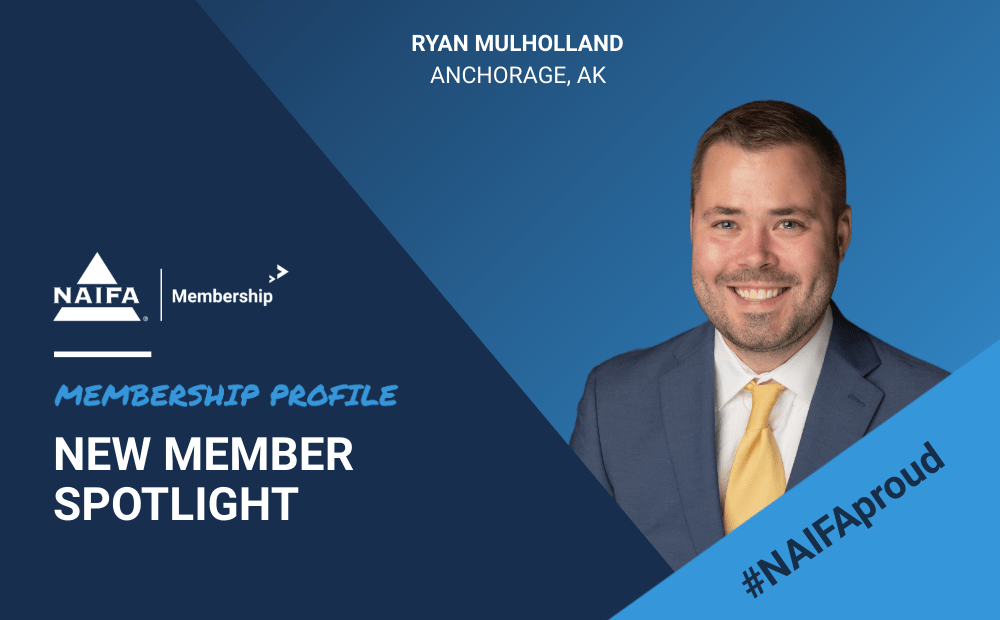 When Ryan Mulholland was young, his father told him that he should sell insurance. But it would take years of hard work—and no small amount of serendipity—for him to begin his career as an insurance agent. Now in his second year as a State Farm agent, he loves his work because he helps protect families every day.

After bartending for several years, Mulholland decided to seek a career path that would allow him to spend time with his growing family. He was working as a cell phone salesman when he met an insurance agent who would change his life forever. The agent came into Mulholland’s store for a phone charger and left with a brand-new phone. He was impressed with Mulholland’s sales skills and, fifteen minutes later, Mulholland received a call from State Farm agent and NAIFA member Stacey Allen. The pair met for coffee, and Mulholland started his career with State Farm soon after.

Mulholland took some time away from insurance to make more money to support his family but knew he wanted to return to insurance one day. His chance came a few years later when a book of business opened up at State Farm. He and his father, a long-time chiropractor and business owner, drew up a business plan. It was an extensive application and interview process, but in the end, Mulholland got the job and was back where he belonged.

On the busiest road in Anchorage, Mulholland gets plenty of foot traffic from students at the local university and small business owners. He offers a variety of insurance products and banking products and is already planning ahead for his mortgage license and securities licenses.

Mulholland's passion for protecting his clients is clear. “This career is important on such a tremendous scale because we're protecting people's lives,” he says. “If we weren't thorough, if we didn't follow up, that person might not have had coverage. It could ruin a family.”

In the past two years, Mulholland has had two experiences that serve as reminders of the impact insurance policies can have on families. Just a few weeks into his practice, he met with a frugal client who wanted a homeowners’ policy with minimal liability coverage to save a small amount in premium. Mulholland convinced him that, with just a few feet between his house and his neighbors’ houses, he needed more coverage. Three weeks later, the man’s house caught fire and burned down both his home and a neighbor’s. That day, the liability coverage Mulholland put in place kept his client’s family from financial ruin.

His second story is one of great personal loss. Mulholland’s father was young, healthy, and beloved by his community. One day, he was helping clean his own father’s gutters and his ladder fell out from under him. He experienced a level 3 head trauma and passed not long after. That’s when Mulholland found out that his father had a life insurance policy that ensured his widow would be taken care of for life. Mulholland says that his father’s last gift to him was his story. “You just never know when it's going to happen,” he begins. “I would have never in a million years thought my dad would pass away, but my mom is going to be taken care of forever because somebody took the time to have a good conversation with him.”

Mulholland was introduced to NAIFA by fellow State Farm agent Al Bowler, a loyal NAIFA member since 1985. Bowler has been an invaluable resource, says Mulholland. He grows and improves by watching and emulating experienced agents like Bowler. “When you see people like Al Bowler who have been successful for 40 years, I'm not trying to reinvent the wheel,” he says. “[He] already built it—I just need to do the same thing.”

Between his daughter’s gymnastics competitions, volunteering in his community, and home improvement projects, Mulholland stays busy, but he always makes time for his wife, his three children, and—of course—the family dog.

Thank you, Ryan, for your hard work and dedication. We look forward to a bright future in the association for you and are #NAIFAproud to call you one of our own.