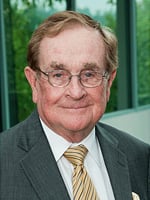 Stewart is an executive consultant for Penn Mutual. In this role, he assists the company with distribution growth and recruiting initiatives that play a vital role in the organization’s strategy.

The Alumni Hall of Fame recognizes graduates of The American College’s designation or degree programs, who have made extraordinary contributions in time, effort and energy to The College. Individuals must be long-term volunteers and active participants in The College’s community and learning environment. The selection of the Alumni Hall of Fame recipient is based on past nominations and new nominations from graduates. Being nominated previously does not exclude individuals from consideration.

Larry Barton, Ph.D., CAP, president and CEO of The American College, stated: “Maury is a recognized leader among financial services professionals. His commitment to developing the next generation of industry leaders is unsurpassed. He is a testament to life-long learning and an inspiration to others interested in pursuing ongoing professional career education through The American College.”

Before rejoining Penn Mutual in 1999, Stewart was a general agent in the company's Minneapolis agency from 1955 to 1960. For the next 26 years, he served as GA for Penn Mutual’s Philadelphia agency. His leadership during this period helped the Philadelphia agency become the company’s leading office for 10 years in a row. Stewart maintained a consistently high level of personal production as well. He earned 12 President's Awards and had the honor of being named president of Penn Mutual's General Agents Association twice.

Stewart has held numerous leadership positions in GAMA, and was inducted into that organization's International Hall of Fame. His many efforts on behalf of NAIFA earned him the association’s 2003 President's Cup Award and a place in the Philadelphia Life Underwriters' Hall of Fame. In addition to these achievements, in 2004, the Round Table of New York recognized Stewart by presenting him with its Lifetime Achievement Award.

The ‘Wisdom’ of Borrowing for Small Business