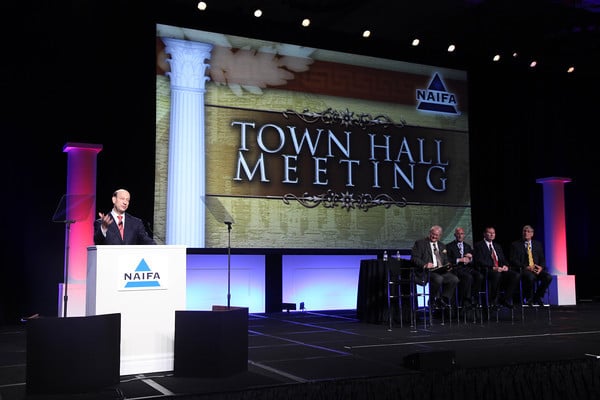 The NAIFA Executive Committee covered topics from membership numbers to the partnership resolution between state committees and the national group during the 2012 NAIFA Town Hall Meeting, which took place Saturday, Sept. 8, at Caesars Palace, Las Vegas.

President Robert A. Miller, MS, MA, opened the meeting by reminding members of the importance on serving members. He spoke of the importance of the partnership resolution bylaw, a voluntary call to state memberships to work with the national committee to grow NAIFA’s membership, combine resources to reach goals and execute NAIFA’s mission in a unified, consistent manner.

NAIFA treasurer Matthew S. Tassey, CLU, ChFC, LUTCF, then took the stage to speak of the difficulties on the declining membership and increasing membership dues. With NAIFA’s increasing involvement in advocacy and government dealings, the current membership dues have not been enough to cover costs. Tassey went on to inform the audience of a proposed bylaws change for membership dues, by having a modest increase of $15.

The floor was then opened up to members, who were given the opportunity to text or ask, via microphone, questions and comments.

More than a dozen members posed questions to the executive committee, primarily surrounding the membership decline and ways to fix it, increased dues, the partnership agreement and the contested elections for committee executives.

Throughout the audience questions and comments, the executive committee was consistent on their resolve that the state and national group need to work more closely together to strengthen the three core functions of business: membership, recruitment and maintaining numbers; advocacy and government involvement; and professional education and development.

“Let’s build each other up so we can build our future together,” said Secretary John F. Nichols, MSM, CLU.

With an Assist From Dickens, Robert Miller Offers His View of NAIFA's Present and Future