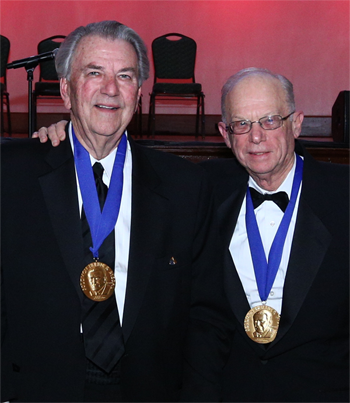 Peter C. Browne, LUTCF, co-founder and longtime manager of Price, Raffel and Browne, an Ameritas affiliate, and Alan Press, CLU, LUTCF, former CEO of the Wealth Advisory Group, were recently awarded the Huebner Gold Medal in Chicago. The Huebner Gold Medal is the highest honor bestowed by The American College.

The Huebner Gold Medal is named for Dr. Solomon S. Huebner, founder of The American College, and has been awarded annually since 1975. It honors individuals whose support of The College and its programs, and whose dedication to education and professionalism, have been of particular meaning to the mission and progress of the institution.

Browne has served as president of the New York State Association of Insurance and Financial Advisors, and its New York City chapter. He is a member of the Board of Directors of the LIFE Foundation and past Treasurer and Trustee of the NAIFA Board. In addition, Browne is a member of the Board of Trustees of The American College and is a past Trustee in the National Board of LUTC. He holds the distinction of Top of the Table membership in MDRT for 27 consecutive years.

Press earned his CLU and LUTCF designations from The American College. He joined The Guardian Life Insurance Company of America in 1956 and has been an agent and a supervisor. He was named a general agent in 1964. Currently, Press is a senior vice president and the past CEO of the Wealth Advisory Group, LLC, a Guardian general agency in New York City.

With more than 55 years of experience in financial services, Press has served as the president of important insurance industry associations, including the New York City and New York State Associations of Life Underwriters and NAIFA, and was a trustee to The American College.

Press has also testified before the U.S. Congress on numerous insurance issues. He has received prestigious industry awards, including the John Newton Russell Memorial Award in 1991, and was inducted into the GAMA International Management Hall of Fame in 2000.

Browne and Press’ names will be added to the Huebner Gold Medal Recognition Wall located on The American College’s campus. The wall features the names of every medal recipient since the award’s inception.

Breaking Through Your Business Plateau