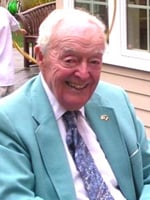 NALU Past President John P. Meehan, who died on February 11 at 90, was one of our association’s most colorful and passionate leaders. I was privileged to be one of John’s several protégés in my NALU/NAIFA career.

After service in World War II, and with a degree from Boston College, John spent his entire insurance career in Boston with the Mutual Life Insurance Company of New York—MONY--where he built one of its most successful agencies. He and his wife, June, had seven children, three of whom have each spent more than 30 years in the business.

John was president of NALU from 1971 to 1972, after winning a hard-fought election for Secretary in Houston against Alabama’s Frank Steiner in 1969. An important NALU initiative at the time was something called HR 5, which would allow tax-deductible contributions to education-funding plans.

John had been responsible for the creation of the New England Forum a few years earlier to give the six New England states voting parity with states like California, Florida, New York, etc. In Houston there were 89 New England delegates all committed to getting John elected Secretary. The contest was fierce.

But John had two aces up his sleeve. In the middle of the convention, he flew back to Washington to testify on behalf of HR 5, a fact we New Englanders publicized well. Naturally Frank Steiner was furious, but that was only the beginning.

NALU had bought a couple thousand tickets to see the Houston Astros play at the Astrodome and every NALU seat was filled. I can still hear the roar of 2,000 voices--1,999 in joy, 1 in anger-- Frank’s--when at the seventh inning stretch on the scoreboard in center field flashed the words,

For all practical purposes the election was over and John won. Happily Frank Steiner went on to win the following year and he and John became great friends.

One of NALU Past President Bob Tedoldi’s favorite memories of John is from 1976 as they rode to the airport together from Bob’s first national convention. Bob had watched in amazement as John worked his “political magic.” Bob says his enthusiasm for NALU was “over the top,” and he announced to John that he was “eager to be a NALU leader.”

Bob goes on: “John must have been amused by this upstart, but shared his wisdom . . . He told me to continue to pursue my dream, but premise it on service to others, not on my aspirations. If it is fulfilling to be in leadership, then do it without worrying about ‘climbing the ladder,’ and despite the outcome, I'd be happy.”

Long-time Massachusetts AALU National Committee Person Bob Evans remembers working with John on NALU political efforts. He says: “There was never a day when I wasn’t in awe of him”.

He adds: “But when I became Legislative Chairman for MALU, I was even more amazed. He knew the right people in the right places, and singularly kept Savings Bank Life Insurance at bay. And when he would testify on the issue of the taxation of cash values, he all but got a standing ovation from the normally disinterested legislators. He so obviously sincerely believed that his position represented the best position for every client, and every agent.”

NAIFA Treasurer Matt Tassey, CLU, ChFC, LUTCF, remembers that John’s “mind was amazing and his ability to keep track of promises made and kept from the past and into the future was a marvel to behold. Watching him work his magic and seeing his face break into a full smile assured us that our candidate would be called to the stage to take the oath of office.”

Past Trustee Bill Irons adds that John was “the quintessential Boston Irish leader who exuded confidence, had an infectious laugh and a commitment to a purpose that always benefited others.”

My own favorite memory of John is of walking into a fund-raiser for Massachusetts Senator Ed Brooke sometime in the 1980s. John had in his pocket a check for $1,000 from LUPAC, now IFAPAC. We walked up to the senator, John handed him the check, and in a firm voice and with a bright Irish smile, said, “Senator, LUPAC is here!” making it clear in his next sentence that we were the insurance agents. John’s pride and love for us and our industry were unforgettable.

That was John Meehan.

The Principles of Effective Closing