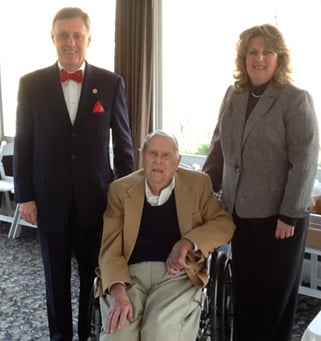 Seibert attended Hampden Sydney College from 1934-1935. He received his insurance license in 1936 and has worked for Lincoln National Life Insurance Company since 1951.

His career began at the age of 20, while he was riding along with his uncle, Frank Trammel, who worked as a general agent for Reliance Life Insurance Company of Pittsburgh, PA.

In 1944, Seibert received a permit from Mexico for estate planning. He traveled to New York City at the invitation of several mutual fund interests on Wall Street, but a career in international estate planning never materialized.

In 1951, Lincoln National purchased Reliance Life. Since Trammel was not in good health, he got his license and began acting as a general agent in his uncle's place. In 1951, Seibert's agency was named top agency in West Virginia, with requirements that included volume of business, persistency and new agents hired. Seibert later established offices in Winchester, Frederick, Hagerstown and Cumberland, as well as in Martinsburg. Under his leadership, 12 agents qualified for Lincoln National's convention in a single year. Due to ill health, Seibert recently closed his office and moved it into his home.

Seibert has been involved in the insurance and annuity business for the past 75 years. He has been active in NALU (now NAIFA), MAIFA and general agent organizations. He has had great association and learning experiences with these organizations.

Over the years, Seibert has been active in many local organizations, as well, including:

According to Seibert, "New agents going into the business will need to have fundamental selling skills, good policy knowledge, and good fundamentals in the use of the computer."

He adds: "The WV governor says he will not have an exchange program, which means more federal government regulations, licenses, etc. More will be coming as to Medicaid as long-term-care is a sure thing in many cases. Life insurance with living benefits will probably come about, and the new law has to be changed to make such policies compatible with Medicaid. Life insurance agents will always be needed. Fee charges now acceptable will probably be stopped. The future for this business looks tremendous. What is best for the client will always be the key."

Why Would Anyone Want to Continue to Cold Call?