The life insurance industry’s highest honor will be presented at the NAIFA Career Conference and Annual Meeting in September as a tribute to his more than 40 years of service and contributions to the industry. 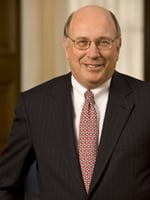 The National Association of Insurance and Financial Advisors is proud to announce Sy Sternberg, former CEO and Chairman of the Board of New York Life Insurance Company, as the recipient of the 73rd annual John Newton Russell Memorial Award. The award is the highest honor accorded by the insurance industry to a living individual who has rendered outstanding services to the institution of life insurance.

Mr. Sternberg will receive the award September 7, 2014, at the NAIFA Career Conference and Annual Meeting in San Diego.

“Sy Sternberg has done as much to advance the institution of life insurance and the agency  distribution system as anyone in the industry,” said Terry K. Headley, LUTCF, LIC, FSS, chair of the 2014 John Newton Russell Award Committee. “The selection committee considered a very strong slate of nominees this year, but ultimately we were honored to unanimously select Sy as the 2014 John Newton Russell Memorial Award recipient.”

A strong advocate for the life insurance industry, Mr. Sternberg played a key role in shaping industry positions on such issues as regulatory reform and tax reform. His chairmanship of the American Council of Life Insurers encompassed the events of 9/11, upon which he encouraged insurance companies to pay claims quickly and without bureaucratic delays.

Mr. Sternberg has been a strong supporter of industry organizations, including the LIFE Foundation, AALU, GAMA, MDRT and NAIFA. Under his leadership, New York Life was the first company to adopt the GAMA/MDRT mentoring program. He developed and implemented several creative and successful programs to increase NAIFA membership among New York Life agents.

“Sy is known as a great friend to insurance agents and a vigilant advocate for the life insurance industry,” said NAIFA President John F. Nichols, MSM, CLU. “As well as anyone, he understands the important role agents play in providing financial security for 75 million American families. For his significant industry contributions and accomplishments, Sy is a well-deserved recipient of the 2014 John Newton Russell Memorial Award.”

John Henry Russell created the John Newton Russell Award in 1942 as a tribute to his father, an influential leader in the life insurance industry and an early advocate of agent education. John Newton Russell served as NAIFA (then NALU) president from 1916 to 1917 and was a contributing founder of LIMRA International, The American College and the Chartered Life Underwriter (CLU) designation.

“I know several recipients of the John Newton Russell Award and never considered the possibility that I would be asked to join this prestigious group,” Mr. Sternberg said. “The JNR Award is a truly unique and very special recognition because it’s awarded by a committee representing every facet of the industry − from agents to life insurance companies, from educational organizations to research. All I can say, is thank you for this great honor.”