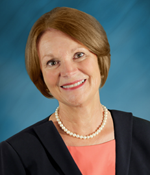 The National Association of Insurance and Financial Advisors has recognized Kristine M. Wolfe, CAE, with the association’s most prestigious honor in association management: the C. Carney Smith Award. Wolfe has served as the executive director for NAIFA-Greater Detroit since 2005 and previously held the position from 1985-1987.

“I am very pleased to congratulate Kris Wolfe as NAIFA’s 2014 C. Carney Smith Award recipient,” said NAIFA President John Nichols. “Her service to NAIFA members in the Detroit area and nationally is an inspiration to all of us who revere this great association. It’s the work of Kris, and dedicated executives like her around the country, that has helped make NAIFA so successful over the past 125 years.”
Wolfe is the 39th recipient of the C. Carney Smith Award. The award was created to honor the legacy of C. Carney Smith, CLU, who served as the National Association's Executive Vice President for 15 years, ending in 1978. Established in 1976, the C. Carney Smith Award promotes the advancement of professionalism in the field of association management among NAIFA state and local associations. Through the years, it has come to symbolize a lifetime achievement award for association executives. The recipient is chosen by his or her peers, who strive to select an executive who embodies the very best of what NAIFA stands for: education, involvement, integrity and service to others.

“Hands down, Kris is one of the finest executives I have ever worked with,” said NAIFA-Greater Detroit 2013-2014 President Michael D. Vukich. “She is a real pro in all aspects of her life. She’s talented, motivated, dedicated and a natural leader. She just makes things happen—and always the right way.”

“Kris ranges from cheerleader to task master for the NAIFA-Greater Detroit Board, and she seems to know which hat to wear at the appropriate time to encourage the Board to stay ever-vigilant regarding membership recruiting and retention,” said NAIFA-Greater Detroit 2012-2013 President Gregory R. Kreiner. “She is respected and well-liked by our membership, and she is always cheerful and ready to serve them above and beyond.”

NAIFA to Kick Off 125th Anniversary Celebration at Career Conference