Love Is in the Air but Money is Still Important! 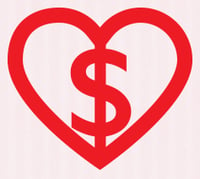 Love may be in the air this month, but according to the latest COUNTRY Financial Security Index, 54 percent of Americans say finances have been a source of tension in their romantic relationships. But that doesn’t scare couples away from talking about money. Ninety-one percent believe discussing finances together is important, and 73 percent think these conversations should happen within the first few months of their meeting or sooner.

For someone who is single and dating, 78 percent of Americans feel they should be concerned about a partner’s debt level. Additionally, 58 percent think a lover’s low credit score is concerning.

In general, Millennials are more accepting of a significant other’s debt level than people in other demographic groups.  Interestingly, 64 percent would rather date a college graduate with significant student loan debt than someone who doesn’t have a college degree.

Sixty-seven percent of Millennials also think singles should be concerned about the amount of debt their love interest has accumulated, compared to 78 percent of the general population and 88 percent of Americans over the age of 65.

The Effect of Student Debt on Retirement