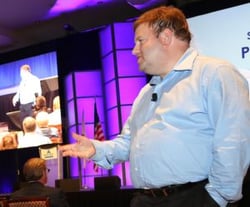 Frank Luntz, the noted political consultant and pollster, entertained and enlightened attendees at NAIFA’s Performance + Purpose conference Monday with his humorous commentary on contemporary U.S. politics. He also provided insights into the use of language and how the specific words we use determine how our audience receives our message.

The biggest mistake the voting public makes when assessing political candidates is when we give them a pass on their dishonesty. We should not simply accept that “they all lie,” Luntz said.

“When you start to accept a decline in integrity it brings the whole country down,” he explained.

Luntz, who has worked as a Republican Party strategist, said that he really liked the campaign of former Democratic presidential candidate Bernie Sanders, because, “Bernie was consistent. He was consistently wrong, and he would have been a disaster for the country, but he is genuine.”

Luntz then transitioned to how the current state of politics affects insurance and financial advisors and how it also presents opportunity for advisors.

“You are small business owners,” he said. “You live or die based on what you do, and Washington does not get you.”

We have tremendous divisions in our country and people are upset, but if people think the country is in trouble, they are more likely to buy security.

The main thing that Americans want more of that they don’t have enough of is peace of mind, Luntz said. Peace of mind ranks above love, success, hope, opportunity or anything else.

This creates a great opportunity for insurance and financial advisors, because their products and services are designed specifically to provide peace of mind to their clients. Luntz suggested asking three questions to understand what people really want: Imagine a life of perfection, where are you? What are you doing? Who are you with? The answers tell you what a person finds most important. If you come up with a plan to help people achieve these hopes, you will be successful.

Luntz is also a communications expert who has written and spoken extensively on the subject. He encouraged advisors to pay close attention to the words they choose when speaking with clients and prospects.

He provided some specific examples of how word choice can make significant differences in how a message is received. It is important for people in sales, marketing and services to tailor their language to their audiences to ensure that they are giving people what they want, he said.

In marketing pieces, for example, “count on us” is weaker than “you deserve,” because a sales pitch should be about the client, not the service provider. People are looking for “options and guidance,” not “choices and advice.” The latter can make people feel like they are under pressure or being told what to do.

The word “strategy” is more open-ended and inviting than “plan,” which people take as a preparation for a one-time event. “Financial independence” conveys wealth, whereas “financial security” feels less wealthy.

“It doesn’t matter what you say,” Luntz told NAIFA attendees. “It matters what people hear.”