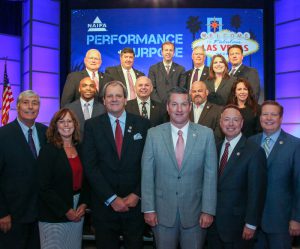 The National Association of Insurance and Financial Advisors' representative governing body, the National Council, has elected new officers and trustees at the 2016 NAIFA Performance+Purpose conference in Las Vegas.

“NAIFA and our members face tremendous opportunities and challenges, which promise to make the coming year an exciting one,” Dougherty said. “From legislative and regulatory matters to advances in technology and evolution of the marketplace, NAIFA is helping members navigate a new landscape in our industry. We have begun implementing our NAIFA 20/20 strategic plan to ensure that NAIFA best serves our members and to position our federation to be as strong as it can be. I look forward to working with an excellent group of leaders on the NAIFA Executive Committee and Board of Trustees as well as our professional staff and state and local associations as we serve NAIFA members and promote their future success.”

After serving his one-year term as president, Jules O. Gaudreau, Jr., ChFC, CIC, of the Gaudreau Group in Wilbraham, Mass., becomes immediate past president, and will remain a member of NAIFA’s Executive Committee.

Gregory T. Toscano, LUTCF, of Johnson Insurance Consultants in Duluth, Minn., was elected to the board to serve a two-year term. Toscano was previously a member of the board, 2013-2015. Delvin L. Joyce, CLU, ChFC, of Prudential Financial in West Palm Beach, Fla., was appointed to the board for a one-year term.

The National Council also voted in support of two bylaws amendments initiated by the NAIFA Board of Trustees. The first amendment adjusts each NAIFA member’s national dues investment by $6.00 a month, beginning Jan. 1, 2017, to fund the NAIFA 20/20 strategic plan and to maintain NAIFA’s operations as the plan is implemented. The second bylaws amendment will revise the existing NAIFA bylaws provision that authorizes the NAIFA Board to set a corporate dues rate for specific companies. The amendment authorizes the NAIFA Board to set dues rates for companies who wish to pay a group dues rate for their advisors, whether those companies are insurance carriers, independent advisor groups, or broker-dealers.