According to the annual New Year’s Resolution Survey from Allianz Life Insurance Company of North America, a staggering 84 percent of Americans surveyed said that they will not include financial planning in their resolutions this year. This lack of financial focus is at the highest level in the survey’s four-year history, exceeding the 80 percent of respondents who ignored financial planning when making resolutions for 2012 and 67 percent from the inaugural 2009 survey. 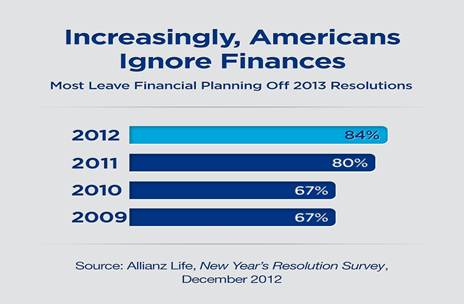 For the fourth consecutive year, the top reason for leaving financial planning out of resolutions was respondents’ belief that they “don’t make enough to worry about it” (32 percent). Twenty-six percent said that they already “have a solid financial plan” and 20 percent attributed it to the fact that they “don’t have an advisor/financial professional,” both responses rising 3 percent from the 2011 survey.

“It’s alarming that Americans’ willingness to ignore financial planning in their New Year’s Resolutions continues to go up year after year,” says Katie Libbe, vice president of Consumer Insights for Allianz Life. “With the responsibility for retirement security shifting from employers to individuals, people need to become more, not less, active with financial planning to ensure they have enough money to fund a retirement that could last up to 30 years.”

Unfortunately, when respondents were asked how likely they are to seek advice from a financial professional in 2013, more than a third (36 percent) responded “less likely,” up 5 percent from 2011. Only 20 percent said they were “more likely,” matching 2011, while 44 percent noted they were “unsure,” down 5 percent from the 2011 survey.

For the second straight year, “health/wellness” topped Allianz Life’s survey as the most important focus area this year. Forty-four percent of respondents made it their top selection, followed by “financial stability” (31 percent), “employment” (15 percent) and “education” (6 percent).

In terms of resolutions they are most likely to keep, “exercise/diet” came out on top at 44 percent, besting “manage money better” (41 percent) and “spend more time with family/friends” (26 percent). Exercise/diet remains the top selection since the initial survey in 2009, although it is down five percentage points from the 2011 survey’s high of 49 percent.