I am a Financial Services Professional Agent with New York Life. My grandfather was Richard “Dick” Wallsten Sr., and he passed away on Sept. 24, 2012.

I began my insurance career at New York Life in March 2009. My grandfather and grandmother were always big supporters of my chosen path.

Just a few weeks ago, a few family members travelled to my brother’s house, and my grandmother was able to fly in from her home in Michigan. She pulled me aside and mentioned that she was going through some of grandpa’s things and came across one of his “insurance trophies.” She brought it with her to pass along to me because she thought I would find it interesting and motivational. I could hardly believe my eyes when she presented me with my grandfather’s NALU local president gavel and plaque! 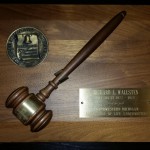 It’s a pretty cool story because it’s a common saying in our federation: “We stand on the shoulders of those who came before us.” Little did I know that just two generations ago, my grandfather was doing the same good work as I am doing to support us.