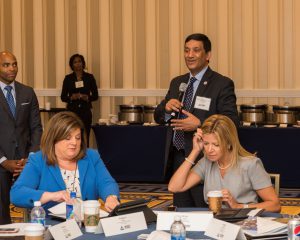 Participants at the Diversity Symposium

The first Diversity Symposium organized by NAIFA was a huge success by any accounts.  Held just before the association’s 2017 Congressional Conference in Washington, D. C., the meeting brought together forward-thinking executives from some of the nation’s top financial firms to discuss the importance of having a diverse workforce and helpful hints for making this happen.

On hand to give a warm NAIFA welcome to symposium participants and introduce NAIFA President Paul Dougherty, LUTCF, FSS, was Ali Agha, Corporate Alliances Team Lead and Vice President at New York Life. The goal of the symposium, Agha pointed out, was to create a forum where participants could discuss strategies for creating and promoting diversity in the financial-services industry. He expressed his gratitude for being part of such an important event, and thanked the NAIFA Board and staff for their help and support.

In his remarks, Dougherty reminded participants that NAIFA is the oldest financial-services organization in the country, with three primary goals: help protect the industry, help members grow their businesses, and help promote ethical practices.

“Our agency force does not reflect the diversity of the people it serves,” Dougherty said. “We need to know how to better serve the various demographic groups in this country. So we have embarked on a critical mission--how to enhance diversity and help agents and advisors serve diverse markets.” 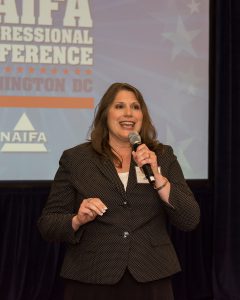 Dougherty thanked NAIFA Trustee and Chair of the Diversity Task Force, Cammie Scott, CLTC, LUTCF, MSIE, REBC, RHU, SHRM-SCP, SPHR, ChHC, and other task force members for their hard work in organizing the symposium and pointed out that the 2017 symposium will be the first of many more to come.

The next item on the agenda was the introduction of the Keynote Speaker by Delvin Joyce, the symposium’s facilitator. Joyce, who is managing director at Prudential Financial and a NAIFA Trustee, encouraged attendees to participate fully in the event so that they will learn something to help “move the needle forward” in their quest for more diversity.

The keynote speaker for the event was diversity expert David Bugea, SHRM-SCP, SPHR, whose presentation was titled, “Diversifying Your Other Portfolio.” Bugea has been serving as a training program manager for Arvest Bank Operations, Inc., which was founded in 1961 and now has 260 locations and more than $16 billion in assets. The bank is also a winner of the prestigious JD Power’s Award, and was cited in Forbes as one of the country’s best places to work. As program manager, Bugea is responsible for delivering Arvest’s leadership, diversity and corporate-culture messages to more than 6,000 associates.

Bugea focused his remarks on how to attract workplace talent that reflects diversity. If the industry does not address the diversity issue, it is not really meeting the needs of the people who need its products and services.

He then asked the audience to identify characteristics that make people “diverse” but to exclude obvious traits like race or ethnic origin, gender and age. Responses to this question were many and varied, including a person’s sexual orientation, economic status, religion, family background, and political affiliation.

Bugea stressed that if we do not promote diversity in our organizations, the diverse employee will feel neglected, suffer a loss in productivity, and might eventually leave the company. This is not a positive outcome for a variety of reasons, including the high cost of replacing and training employees.

There are numerous reasons why organizations strive for diversity, including:

To achieve diversity in a world that is changing rapidly, one must plan strategically, Bugea advised. The first step in a good plan is to assess where you are today. “We will not progress unless we know where we are. This is critical for success; so, do a solid assessment of where you are today.” You should then determine where you want to be, how much you want to invest, and your propensity for risk.

Many organizations share some common business reasons for deciding to push for diversity, according to Bugea. These include:

No matter what is driving the need for more diversity in any organization, diversity should be a top-down initiative, which requires universal support. It includes the following steps:

In seeking diversity, stakeholders must go beyond merely pulling applicants from a “diverse” pool, and must train managers to ensure that the hiring criteria and processes used are inclusive.

To create inclusion, stakeholders should: 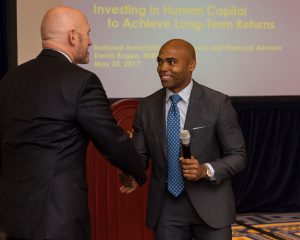 To sustain diversity initiatives, they should:

The final step is measurement of the program, Bugea added. In dealing with this aspect, managers must realize that successful implementation is more likely when defined goals are set for any diversity initiative, they should begin with the end in mind, and should remember that depending on the objectives identified, metrics may be quantitative or qualitative in scope.

Success also requires the avoidance of a few common pitfalls, according to Bugea, and cited the following pitfalls from an article published in the July/August 2016 issue of the Harvard Business Review:

In closing, Bugea reminded participants that companies with gender and ethnic diversity are more likely to outperform their non-diverse competitors, and companies with more diverse executive boards had a 53 percent higher ROE than those without.

To enhance participants’ chances for success, Bugea told them to engage in individual and small-group networking, as well as take advantage of NAIFA’s resources. “NAIFA is willing to listen to your concerns and work with you on your diversity issues and initiatives,” he said.

During the meeting, participants also had a chance to learn more about NAIFA’s Diversity Task Force from the Task Force’s Chair, Cammie Scott.  According to Scott, the Task Force has three Working Groups:

1) The Membership Work Group. This group develops membership initiatives that are aimed at meeting the needs of specific groups. It monitors and advocates for a more diverse NAIFA membership and works to develop a more inclusive culture in membership. This group recently conducted a baseline survey of NAIFA members regarding diversity, and has also created a Diversity Award.

2) Diversity Resources Group. An important goal of this group is to increase the number of diversity resources available to financial professionals. The group will be generating a report for participants after the symposium.

3) Diversity Alliances. These will work to provide resources that NAIFA’s Corporate Partners can use to train agents to work with people from different cultures and assist them in recruiting and retaining diverse agents.

Scott concluded by echoing what Dougherty said earlier: The symposium is just the first of many more to come. “We want to bring you back to continue the conversation,” she said. “We want to address the issue of how to attract and retain more people from diverse backgrounds to the financial-services industry. Diversity takes time, but we are willing to make the cultural shift.” 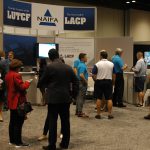 LACP certification off to 'a flying start'